Twigs and Apples Issue Two
Posted by twigs&apples at 09:20 2 comments: 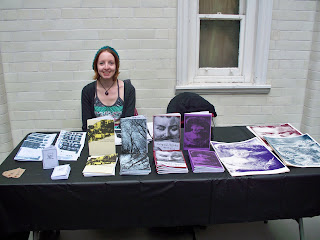 Yesterday Twigs and Apples held a table at the Victoria Baths Fanzine Convention, Manchester - many thanks to Natalie of The Shrieking Violets for inviting us along! This was the first proper convention that we've been involved with and it was a good chance to get some work out and have a chat with people there.

The venue couldn't have been more unusual or beautiful - a Grade II listed Edwardian Baths centre built in 1906.  The zine fayre part was held on the balcony, with Future Everything hosting an odd selection of tables below. 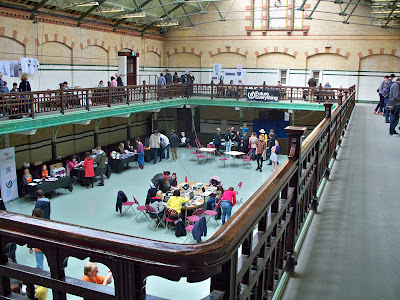 Adjoining the main hall are two of the swimming pools, with original changing rooms, seating areas and features. Each hosted an artwork - 'Physical Oscillators' by Antony Hall (beautifully simple) installed in one, and performance by Yu-chen Wang (less impressive..) in the other. 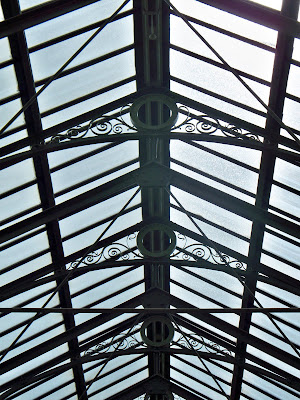 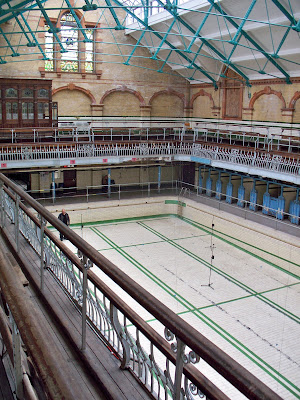 I think having Future Everything stuff at the same event brought a different mix of a crowd, as quite a few people had no idea what a zine was (!) - but most I spoke to seemed to really like the DIY ethic of it.
Strangely though zines were what we sold the least of. Our free bits were very popular, (thanks to Jill of Hello Vegan zine - all the way from Toronto for some issues!) and we were very chuffed that our new screen-printed posters sold well, and my new Camus - inspired mini-comic! 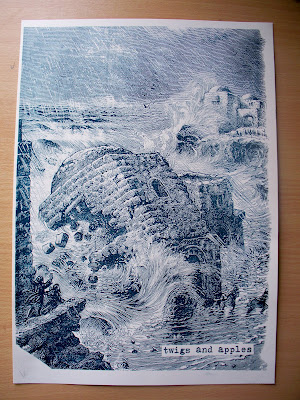 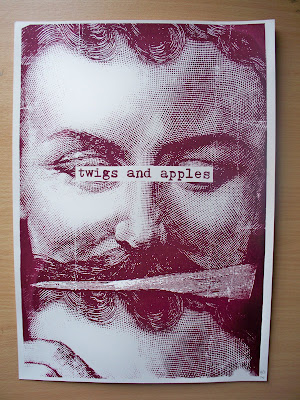 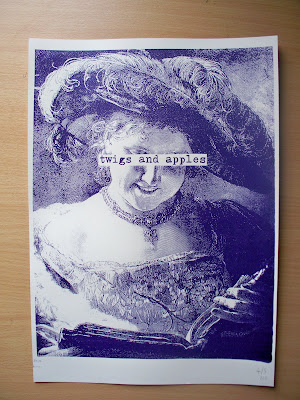 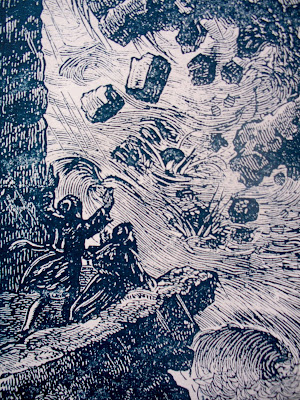 Posted by twigs&apples at 13:48 No comments: 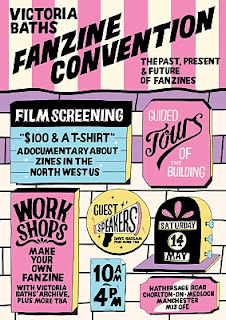 Twigs & Apples will be holding a table at the Victoria Baths Zine Convention, Manchester, this week!


It's held in an old 'Edwardian swimming pool and Turkish bath complex' building, which looks really beautiful and I can't wait to explore it.


We'll have a few issues of our title zine available, plus a couple of solo/special issues, hand screen-printed posters, and maybe a few other bits and bobs.


Make sure you come and say hello :)
Posted by twigs&apples at 06:04 No comments:


A long, long overdue post about our new issue - which came out just over a month ago...! The first run sold out quickly at Albany Road Fest - but we recently (finally) got the second run out...


A slight change of design this time around as we have a wraparound cover, full-bleed pages and slightly-smaller-than-A5 size! 52 pages in black and white, and the bargain price of £2. As usual this just about meets our costs - we're not doing this for profit, but to provide an outlet for creative talents of all kinds of disciplines.


Or you can order it direct from us (50p P&P). Submissions for future issues are open and ongoing! 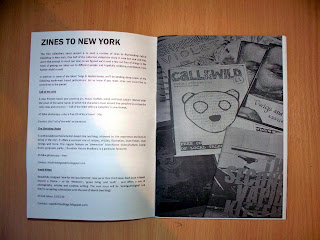 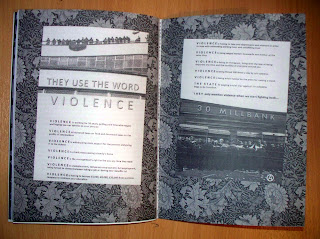 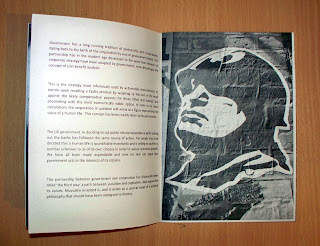 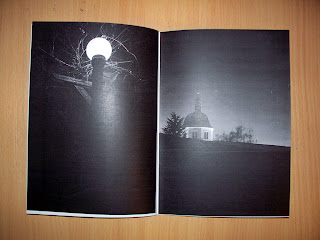 Posted by twigs&apples at 13:35 No comments: 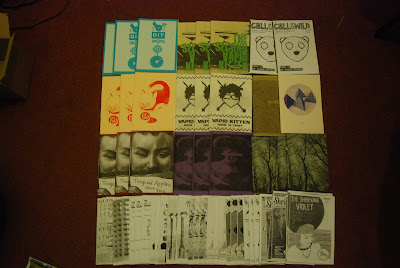 Last year, Ben and Sarah of T&A visited New York (lucky things) and came across Bluestockings, an independent bookshop/fairtrade cafe/activist centre. They left a few copies of the zine (with the proceeds going as a donation to the shop). This year, we decided to send some more issues in the hope of getting a wider readership and perhaps some international submissions. We decided to extend this project and invite other UK-based collectives and zine-makers to contribute; sending us a few issues for free or wholesale price to include in our big parcel.


It's been a good opportunity to get in touch with other zine-makers (who hopefully we'll trade/collaborate/work with in future) and hopefully they'll get some good exposure from this project too.


This project, and a few of these zines (cotw, vapid, shrieking violet) are mentioned in the latest issue of Twigs & Apples, though we went to print before we got all our collection together. Here's the full list of what we collected!


- Call of the Wild: A new Preston based zine covering art, music, fashion, word and local culture. Named after the novel of the same name, in which the characters meet around the campfire to escape the cold, relax and converse - 'Call of the Wild' offers a 'campfire' in zine format.
A5 b&w photocopy, plus a free CD of local talent. 50p


- The Shrieking Violet: A well-established Manchester based zine and blog, informed by 'the experience and love of being in the city'. It offers a constant mix of recipes, articles, illustration, short fiction, local listings and more. The regular feature on 'alternative' Manchester history/culture (canal boats, gargoyles, parks...) by editor Natalie Bradbury, is a particular favourite.
A5 b&w photocopy, free!


- Vapid Kitten: Beautifully designed 'zine for the lazy feminist', now up to their third issue. Each issue is based around a theme - so far 'feminism', 'green living', and 'craft' - and offers a mix of photography, articles, and creative writing. The next issue will be 'analogueVdigital' and they're accepting submissions until the end of March (see their blog).
A5, full colour, £2/£2.50


- The DIY times: A zine we came across at Supersonic Festival 2010 in Birmingham. Lovely colour hand screen-printed cover; black and white innards featuring a host of pictures and interviews with creative types. A collaboration between Birmingham based screen-printing studio 'Get a Grip' and Exeter based creative/printing community 'No Guts No Glory'.
A5, colour cover, b&w pages, £2


- OWT creative: An art zine put together by recent grads of Manchester Met University. Each issue is based around a word-theme and contains a great mix of text and image based works, plus a beautiful hand screen-printed cover. They put out very smart art zines at a very quick rate which, quite frankly, makes me kick myself to work faster and harder...plus they make tee's, prints and stickers.
A5, colour/b&w, £5


We'll let you know how it goes. If you're one of the collectives involved, we'd be interested to know if you make any fans/contacts in New York through this project!


PS. We also sent out some zine parcels to nice folk in the UK this week - hope you enjoy! ;)(emails will never be as fun as real post). 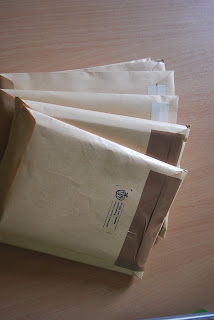 
T&A is very happy about the opening of Beautiful Planet in Preston earlier this year - a volunteer led green centre / net cafe / social space / not-for-profit co-op, founded by our friend Brett, (who can be spotted wearing shorts whatever the weather).


There's tons of information leaflets, posters, literature and the like, covering all sorts of topics - green/social/environmental/activism/veganism/arts/community/local groups and services.
There's space for about 15 people, and computers with internet access; and you can rent it out for social groups/meetings/events for very cheap or free. It's a place to network and share ideas at a grass-roots community level - new ideas, volunteers and societies/groups are very welcome.
Future plans include games nights, small film showings, crafts workshops, and talks.


You can get a nice brew for about a quid, buy Fairtrade whole-foods and snacks, and - perhaps most importantly - lovely home-made vegan cakes and things (by Sandra!)


The shop is located at 69 Friargate (opposite Roper) - go and say hello!


Half of Twigs and Apples recently custom made some 'Beautiful Planet' prints on canvas bag to sell in the shop. They might not be perfect (we're still learning..) but at least they're all unique :) Custom hand-pulled screen-print on stock canvas bags, selling for about 3 quid. There's only about 10 in the first run, so we'll see how they go! 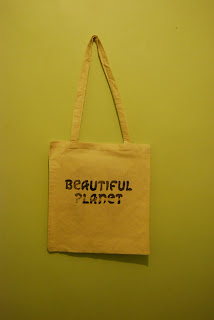 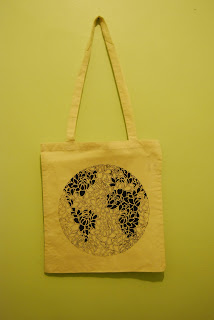 We'll be stocking the zine in there very shortly, too ;)
Posted by twigs&apples at 14:37 4 comments:

Hello! And apologies for neglecting this blog a bit....
Here's a little update/reminder on what we do/have done so far....Issue 4 is set to launch this weekend (details soon!)
T&A zine
Our main publication is a collaborative project - non-themed issues accepting a whole range of contributions in A5 black and white format. We distribute across the north west (and sometimes further...). Just drop us a message if you fancy getting involved.
We regularly feature: art / illustration / rants / reviews / photographs / interviews / politics / etc...for example:


Contact us to buy any - a mere £2 each. This isn't for profit, just covers our printing costs.
twigsandapples [at] hotmail [dot] co [dot] uk

---------------
Special Issues
In addition to the title zine we work on special issues / other titles - most recently one for Harvest Preston Festival. Last year Twigs&Appler miss riddel also released a short-run of a splendid photography zine. Hopefully we'll be working on more specials like these under 'Twigs and Apples Publishing' this year.
Posted by twigs&apples at 15:36 No comments: